5 I wish I would’ve read it when I was younger stars!! 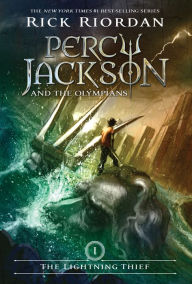 I really enjoyed this book.  I’m sure everyone already knows what it’s about.  Yes I was the person who watched the movies first.  I must say as per the norm the book was so much better!!

This book follows a 12 year old boy who finds out rather abruptly that he is a demi-god .  Everything he thought was normal is not.  He finds out what he is and then of course is attacked… again… then his mom tells him about camp half blood.  Camp Half blood is just how you would imagine it to be.  It’s a camp full of demi-gods… they range in ages though.  Each child/teen gets sorted into there cabins when their parent claims them as their own. Each different cabin is run by a different god, which is so cool if you think about it all the children in these select cabins are half brothers and sisters.  However there is one cabin that is full of kids not yet claimed or may never be claimed. This is the cabin Percy first ends up in.   Poor Percy always seems to be getting attacked, whether it is at real school or at camp… Then his father finally claims him… things start to get really interesting after that!!

I loved how this book unraveled it was really well written.  Percy is told he has dyslexia and ADHD  and what that really means is that Percy can only read Greek really well.  Average human things do not come easy to him since he is part god.  I really truly enjoyed Percy’s interactions with his mom. Even though they were few in this book you could see the love they had for each other.  How his mom would obviously do anything to protect him including marrying that man.. and how Percy would do anything including going to Hades to rescue his mom.  Percy’s relationship with Grover was neat.  They haven’t been friends a really long time but seem to know each other well.  While Grover comes off as a not very strong individual in this book I think he is very strong.  Grover would do anything for Percy he’s always there to back him up no matter what Percy comes up with. In Camp Halfblood we meet Annabeth… She comes off like a know it all but honestly that is my favorite character. The one who thinks outside the box can mentally see the outcome before it happens.

I think many 11 year olds will relate to this.  It has children teasing each other, overcoming obstacles… thinking outside of the box.  I can’t wait until my kids get a little older to read this. I’m very excited to discuss it with them some day.. then maybe we can laugh at how bad the movie is together?? haha sorry…

Paperback, First edition, 377 pages
Published March 1st 2006 by Disney Hyperion Books (first published June 28th 2005)
Original Title
The Lightning Thief
ISBN
0786838655 (ISBN13: 9780786838653)
Percy Jackson is a good kid, but he can’t seem to focus on his schoolwork or control his temper. And lately, being away at boarding school is only getting worse—Percy could have sworn his pre-algebra teacher turned into a monster and tried to kill him. When Percy’s mom finds out, she knows it’s time that he knew the truth about where he came from, and that he go to the one place he’ll be safe. She sends Percy to Camp Half Blood, a summer camp for demigods (on Long Island), where he learns that the father he never knew is Poseidon, God of the Sea. Soon a mystery unfolds and together with his friends—one a satyr and the other the demigod daughter of Athena—Percy sets out on a quest across the United States to reach the gates of the Underworld (located in a recording studio in Hollywood) and prevent a catastrophic war between the gods