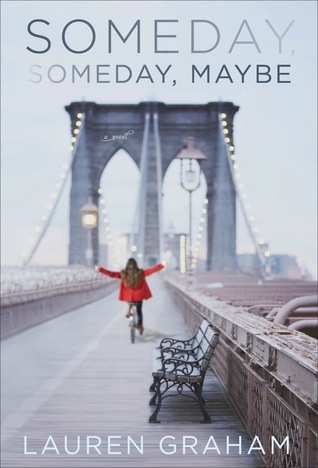 I was so excited and terrified to review this book.  Lauren Graham is an AMAZING actress, could her books live up to her acting hype?  I think this one did.. I’m not going to lie I struggled a little bit in the beginning trying to figure out exactly where this book was going.  Once I figured it’s not actually meant to be an intense book,  it is meant to be a fun lighthearted read I really enjoyed it.

There is no ease into Franny’s world you are plopped right into her reality from the beginning of the book.  Franny has set a time limit for herself on becoming an actress.  She lives in an apartment with her best friend and another roommate named Dan. She is taking an acting class and has always dreamed of being on stage.  Throughout this book you get all of Franny’s feelings, the acting ups, the acting downs, and the not so acting in between.

This is not a plot heavy driven book, it’s mainly character driven.  You are literally just following Franny throughout her trials and tribulations with acting in New York.  While at some points I did find Franny annoying with how naive she was being, she is also unbelievably charming too.  I loved how Lauren Graham made Franny’s thoughts and feelings so relate-able.  How Franny would think she nailed something, then turn around ten minutes later and completely talk herself out of actually doing good. Franny’s self doubt was something that I think we all deal with.   The fact that she was trying to find herself this whole time was interesting too.  It was almost as if she was always dressing for a part and not actually being herself because she wasn’t quite sure who that was. While this book isn’t thought provoking it is unbelievably entertaining especially if you grew up around the 90’s as it’s based in 1995.  The mentions of Friends, hair scrunchies, and something called ER had me rolling on the floor.

I would recommend this book to anyone looking for a getaway book.  This book would be great while on vacation or in between serious books you are reading!

Thank you Social Book Co for a copy of this book in lieu of my honest review.  If you would like to purchase this book please click on the link below!

It’s January 1995, and Franny Banks has just six months left of the three-year deadline she set for herself when she came to New York, dreaming of Broadway and doing “important” work. But all she has to show for her efforts so far is a part in an ad for ugly Christmas sweaters, and a gig waiting tables at a comedy club. Her roommates―her best friend Jane, and Dan, an aspiring sci-fi writer―are supportive, yet Franny knows a two-person fan club doesn’t exactly count as success. Everyone tells her she needs a backup plan, and though she can almost picture moving back home and settling down with her perfectly nice ex-boyfriend, she’s not ready to give up on her goal of having a career like her idols Diane Keaton and Meryl Streep. Not just yet. But while she dreams of filling their shoes, in the meantime, she’d happily settle for a speaking part in almost anything—and finding a hair product combination that works.

Everything is riding on the upcoming showcase for her acting class, where she’ll finally have a chance to perform for people who could actually hire her. And she can’t let herself be distracted by James Franklin, a notorious flirt and the most successful actor in her class, even though he’s suddenly started paying attention. Meanwhile, her bank account is rapidly dwindling, her father wants her to come home, and her agent doesn’t return her calls. But for some reason, she keeps believing that she just might get what she came for.

Someday, Someday, Maybe is a story about hopes and dreams, being young in a city, and wanting something deeply, madly, desperately. It’s about finding love, finding yourself, and perhaps most difficult of all in New York City, finding an acting job.