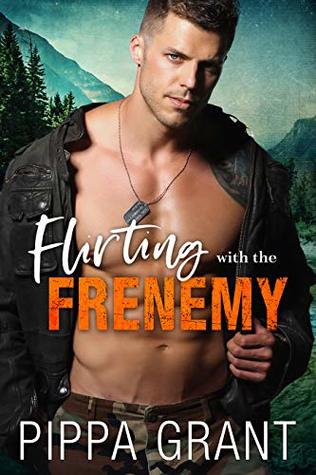 Mission: Survive my best friend’s wedding, where I must play nice with my ex and his perfect new girlfriend.Strategy: Bring the hottest fake boyfriend on the planet.

Complication: Wyatt Morgan. My brother’s best friend. My sworn enemy. Military man. Sexy as hell single dad. The man I let into my panties for one night of hot hate sex after my ex dumped me.

And the man who just scared off that perfect fake boyfriend.

By pretending to be my real boyfriend.

I can roll with this though. What’s the harm in Flirting with the Frenemy if it helps me get the job done?

Complete my mission and move on.

Or so I thought.

Until Wyatt kisses me again and I start feeling things I shouldn’t.

The thing about weddings…nothing ever goes as planned.

I kept seeing the Bro Code #2 book pop up in suggestions for me, and I was intrigued so of course I had to read #1 first and it did not disappoint.  I really enjoyed the pace of this authors writing, and how the romance is definitely slow burn.  Even though the beginning of this one starts off a little fast, the actual romance end is very slow burn.  Also, I really enjoyed the comedic side of everything, it was so hard not to laugh out loud in some points.

Wyatt is a single military dad, which is a very hard thing to do.  He has to split his time in the military and with his son who lives hours away.  I loved to see the connection he has in this book with his son, it was really nice.  In some books they write that the character has a child and then maybe put them in one chapter.  Not only does he have a connection with his son, it was really nice to see how other people reacted to his son, especially Ellie.  Wyatt has always picked on Ellie since they were little and her family practically took him in.  I loved how he thought if he crossed any certain line with her, that her real brother would disown him along with her parents.

Ellie was definitely a fighter of everything, but you can tell she is in a slump when Wyatt comes to shipwreck.  We all get in a slump and its nice to have someone to pull you out of it.  She had her struggles, mostly with the curse that she thought her and Wyatt had, which was really bizarre and kind of hysterical at the same time.  Her relationship with Wyatt’s son was seriously adorable, she just took him under her wing.  I also really liked how her parents just adopted his son like he was their grandchild no big deal, from the moment he was born he was their grand baby.  It was super sweet how she would do anything for her best friend during her wedding… I’m not sure many of us would do the same things.

Pippa Grant is a stay-at-home mom and housewife who loves to escape into sexy, funny stories way more than she likes perpetually cleaning toothpaste out of sinks and off toilet handles. When she’s not reading, writing, sleeping, or trying to prepare her adorable demon spawn to be productive members of society, she’s fantasizing about chocolate chip cookies.

2 thoughts on “Flirting with the Frenemy (Bro Code #1), Pippa Grant”