5 responding to the waves stars!!

Kai’s life is a series of choreographed steps, each one shielding her from the tragic memories of her past. Audition, dance, paycheck, repeat. It’s a broken record, but it’s what keeps her world spinning.
When a tall mysterious stranger zooms into her life, effectively shattering her tightly woven cocoon, her safe and secure world quickly begins to unravel.

Sebastian’s theater production is a sinking ship. To add insult to injury he’s obligated to give it one final run.
The mission is simple—salvage what he can before they all go down with the wreckage.
But first he needs to convince the woman who despises him, despite her darkest fears, to join the cast.

Without her, his past will undoubtedly destroy his future. But with her… he may be opening himself up to more of a challenge than he bargained for.

I slid my palm up until I found his nipple and I pinched hard.

Then I laughed. “Let’s go, Sebastian. You’ll be fine.” I tightened my hold around his middle, pressed my chest against his back, and squeezed.  “Just don’t do any of those crazy stunt things.  I’d like to live until tomorrow.”

Kai is such a spitfire and I loved every minute of her sass.  The banter between her and Sebastian was so great she didn’t put up with any of his crap and he totally wasn’t used to that.  Obviously, Kai has had to fight for every opportunity that came her way, which made her more of the strong person she is now.  Kai has such a huge trauma to get over to get this job and I wasn’t sure she would complete the journey ahead at some points.

Sebastian on the other hand usually came off as a jackass because he was covering his trauma with his wicked temper.  It took longer for him to come to terms with his trauma but during his coming to terms at least he was becoming a nicer person due to Kai’s kindness.  I enjoyed the fact that as he slowly won Kai over, he was also winning the cast over.  While Kai’s trauma was very emotional, Sebastian’s was more in your face because some of the cast having dealt with it before.

I am becoming a huge fan of K.K. Allen her book plots span over a couple months at least, so the romance is slower burn.  The characters learn to support each other, and the angst is not too much and very realistic.  She also includes links that show you exactly what dances she had in mind when writing the book.  I devoured this book and instantly wanted the next one.

“I’m not.” He shook his head. “No one is. We’re here for the ride, and we can only control how we respond to the waves.  So hold onto me, Kai, and don’t let go again.” 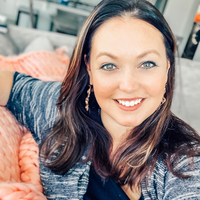 K.K. Allen is the USA TODAY Bestselling and award-winning contemporary romance author of sweet, sexy, and inspiring stories that evoke emotion at every turn.

K.K.’s debut romance novel, Up in the Treehouse, was named the Best New Adult Book of the Year by RT Book Reviews, an honor beyond belief. And she continues to take reader’s emotions on an epic ride every single time with real, layered, coming of age romance stories that will make you fall in love over and over again.

Born in Hawaii, raised in Washington, and currently residing in Florida, K.K. lives for laughs with her little dude, the great outdoors, watching football, dancing the night away, and her eclectic taste in music.

K.K. also loves connecting with her readers and attends signings when she can! You can find upcoming event dates and other information at: www.kkallen.com.

K.K.’s next book, Defying Gravity, is a standalone sports romance, and it’s coming very soon. Add it to your TBR today!

One thought on “The Trouble with Gravity, by K.K. Allen”

@jillshalvis is having a contest on her pages if you post pictures of her books you own 😉 I do have more than this on a different book shelf but my favs are on this shelf... If you love romance and haven’t tried Jill Shalvis I do not know what you are waiting for. 💙💙 #romance #jillshalvis