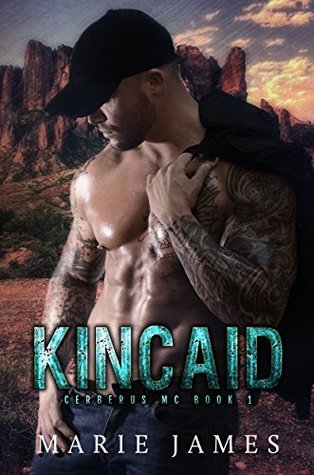 Hero complex?
Possessive?
Not afraid to speak my mind?

I’m also President of the Cerberus MC, a former Marine, and easy on the eyes with arms made to hold a woman tight. I’m the whole package.

I’m not conceited; I’m convinced, and Emmalyn Mikaelson doesn’t have a clue what she’s gotten herself into by jumping on the back of my bike. Special Forces.

Okay I get it, they are bikers, they are former Marines who go into bad situations to save people I was all down for the whole bad boy image.  I even was happy with some parts of the book, he saved her from a really bad situation I give him and the rest of the gang a big hand.  The club is a big family also a huge fan of that super happy with that aspect.  Even the fact that some/most of the women of the club are more like family than you would expect.  I do not approve of the fact that he basically puts her on lock and key and says hey you want to eat that potato chip you ask me first.  Okay it wasn’t that bad, but she couldn’t make any decisions without it being run by him first.  Sound a little controlling?  I could understand the protection when she left the building I mean yah her ex may be looking for her but geez to ask permission to do anything is ridiculous.

Em’s character frustrated me to no end too, she was of course meant to start of naïve because she had been beat down for so long.  Then you expect her to develop, like when they first get to the club and he hands her the two keys to her very own room no one can get in or out.  He’s just instantly attractive, and she just can’t wait to be near him… I mean you have broken ribs for goodness sakes.  Then she is always throughout the whole of the book jumping to conclusions and running away, she not once goes through a period of growth and standing up for herself, its not like this book is a week long of an ordeal it’s a span of time weeks because he goes away for weeks on end and she doesn’t develop as a character.

The final nail in the coffin for me was when the get down to doing tactical stuff and these guys are former military and he hands her a pistol and she’s never used one and he’s just like pull the trigger because you know that’s all it takes… Then when grabbing the gear from the truck which I don’t know why its not locked up but that’s besides the point.  She’s not describing it in proper terms, then they take positions that leave them all vulnerable to being shot, matter of fact TWO of them get shot for being stupid, and if the one guy was former military that was attacking, he wouldn’t of aimed for the vest he would’ve aimed for the head. Maybe it needed to be done for drama or whatever but it just irritated the crap out of me.

I feel I need to say this book obviously wasn’t for me and I’m not giving it a star rating, yes I read it the whole way through.  Maybe I was in a bad head space when I read it, I’m obviously in the minority when it comes to this book, I will always give an author at least two tries.

Marie James is a mother of two boys and wife of 15 years. She’s spent most of her life lifetime living in central Texas, with only short stays in South Carolina, Alabama, and Florida. Her passions include reading everything under the sun and sewing, although she doesn’t get to sew much these days!.

Writing has always been a passion and she’s enjoying every step of the journey!

One thought on “Kincaid (Cerberus MC #1), by Marie James”