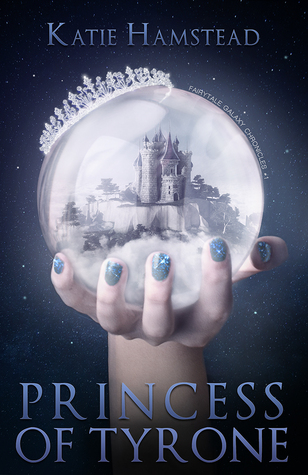 I’m a sure sucker for any kind of fairy tale retelling; the blurb for this one had me sucked in.  Then I read Jasmine’s review  @ How useful it is and I knew I just had to read this book!!  I am glad I did, while it did carry some of the typical tropes that usually put me off the author twisted them in such a way that I wasn’t upset about them being in the book.  Those wicked little fairies… especially Ashlan.. I never saw half the stuff she had planned until the very ending.  Well played little fairy.

This story follows a young lady called Apolline growing up in a little town called Mish, which is located in an outer-perimeter planet.   She is relatively happy living out here, she has three fairy’s to take care of her.  Even though they may drive her slightly insane every once in a while.  All they can seem to talk about lately is her upcoming betrothal, and all Apolline wants to do is stay in Mish and hunt.  When you start this story you realize that Apolline is Sleeping Beauty, however she is much more than that.  She is told the stories of Snow White and Cinderella?  Why? Because these stories are much more than stories they are important pieces of information that she needs to know in order to survive the future.  While being prepared for her marriage Apolline makes an unexpected friend in a traveling solider named Allard.  While of course she is attracted to this young man she has set herself up to marry her betrothed.  I loved that Apolline had such a strong sense of self worth.  She was not going back on her word to anyone, not matter who it was.  She is also someone young people could look up to.   Apolline can stand on her own two feet, does not need a young man to save her, loves with her whole heart, and forgives people when necessary.

Allard was also a great character, I feel like I didn’t get to connect to him as much as I would’ve liked to.  He is also betrothed but I think he is coming from a different place than Apolline is coming from. He is from the good side of galaxy, he hasn’t had a rough child hood he has known who he is all of his life.  Everything has been set up in an x,y, z pattern, no guess work. However Allard feels the need to branch out and see more of the galaxy hence the reason for going on tour with the military unit.  He wants to see how everyone is surviving, during such a tumultuous time.   Which in the end just shows how amazing of a leader he will be when he eventually becomes King.  I loved how sweet and respectful he was of Apolline and her wishes, when she says she just wants to stay friends he says okay.  I truly liked how he wasn’t intimidated by the fact that she could stand up for herself and even protect him sometimes instead of him protecting her.  They work well as a team instead of him being the main protector, or the alpha male.

All in all I really enjoyed this story, I enjoyed how there were multiple fairy tales in this one book instead of just one. I loved seeing all of the friendships between Allard and his friends and Apolline and her town “family”.  The dialogue within the characters was really well written sometimes my heart was breaking and sometimes I was laughing out loud.

Thank you to Katie Hamstead for my copy in lieu of my honest review.  I honestly cannot wait to see what is in the next book!!

Apolline is happy hunting magical creatures on her pirate infested outer-perimeter planet. She is a fantastic shot, and doesn’t flinch at the blood and guts of her kills. Never once did she consider she could be the missing Princess of Tyrone.

All her life, she has heard the story of the Princess, cursed to sleep for eternity, unless her betrothed, the Prince of Oran, gave her true love’s kiss. Although Apolline knows she is betrothed, she thinks her fairy guardians arranged it out of ignorance of human ways. The thought she could be a princess is inconceivable.

Then Allard appears. Handsome, charming—but he’s not hers to have. He’s betrothed, too. Her guardians warn her against her new found friendship, but she and Allard meet in secret anyway. Despite her rough exterior, he sees beyond her gun-slinging bravado, and their love blossoms.

But the deadline for the sleeping curse is approaching. If Apolline falls in love with the wrong person, she could end up sleeping forever.

A quirky, adventurous retelling of Sleeping Beauty, with a less than princess-ly princess!

11 thoughts on “The Princess of Tyrone by Katie Hamstead”